but google was working on it’s own Fast Share, now renamed to Nearby Sharing will be available with future Google Play Service Update, xdadevelopers video below

… and there is even no buildin solution to share notes in android, on the other hand how easy it could be for iOS or even Windows

windows 10 enrollment hasn’t to be complicated, Out Of The Box Experience provide easy staging without the need of Azure, modern management provide location independant onboarding, configration and app installation

while microsoft has had it’s separate versions of word, excel, and powerpoint available for iOS & android, the new Office app combine all of them into a single app – combine functionality – reduce filesize in total – o365 provide powerfull graph api to integrate into enterprise deployments

and for sure a new icon, like egde and other apps > read about the all new edge browser with chromium

how to get the new Office app, for android register here or dirctly download here

refer to screens and short demo video below

get the chrome browser for android right here

you have to signin for every service online, with 10minutemail.com you don’t need to provide your own/private mail account, it creates a valid random account for about (for sure) 10 minutes, the provider explains

sign up for a site which requires that you provide an e-mail address to send a validation e-mail to. And maybe you don’t want to give up your real e-mail address

as same as for mail it is also available for sms, your don’t have to provide your personal phone number, e.g. send any verification code to one of the free available numbers

in it’s may 2019 update, select start  > settings  > system  > clipboard , and then use the toggles to turn on both clipboard history and sync across devices. you can also press the windows logo key +V as a shortcut to easily access your clipboard – what’s also new in current windows update

use Universal Clipboard with any Mac, iPhone, iPad, or iPod touch – read requirements here – sign in with your apple id, enable bluetooth, enable wifi and enabele handoff – copy the text, image, or other content content – is automatically added to the clipboard of your other nearby device

to share data between difference devices and vendors it’s quite tricky, the way touse to any of the following 3rd party services like OneNote, Google Keep or Pushbullet – additionally your able to enrich your content that copied with style and format

fortunately, there several option and a lot more apps available for android or in chrome webstore – but with all of it’s possiblity …

keep security and trust of your data in mind

with over 2 billions of android device world wide running android but with a large version fragmentation, google is acting with project treble to push faster updates, for enterprise recommended devices has to push security update within 90 days – attached current version spread of android versions

.. and even new releases got a great adoption rate for apple devices, already half of all iOS devices running the latest release

kaiOS quietly gained to one of the most used mobile operating system, it bridges the gap between feature phones and smartphones

you may also interessted in

but there a argument to not rely on device management api – ios lack unfinished restriction of unmanaged/managed data, it is possible to bypass limitation under certain conditions – android depricated existing device admin feature in favor of android enterprise technology, but new container ui/ux isn’t consitant between different os releases and lack of some existing features, e.g. private/business calender overlay

privacy is a main point to offer a byod solution for your employees, ios managed devices could report your installed app and fully wipe even your private data (until user-enrollment was released), android enterprise addressed this from the very first, apple introduced user-erollment to address privacy concerns for byod deployments

usablity is the other big point to address for your users – while apple provide the ability to use business data within ios native applications, android lack of a consistant look and feel between os releases and different management api, batch icons differ at different releases and espesially samsung devices – to ease support provide the same email app across both mobile os

mobile application management also named non-MDM managed your data within an app or a entire framework, the app is’t capable to control your device, e.g. to enforce device pin or encryption – major mdm vendor like airwatch, mobileiron, blackberry formerly good and citrix provide a framework to secure your data over serveral productivity apps, without the need to rely on device api

microsoft offer with it’s office 365 apps the capability to secure business data with app protection policies without the need to enroll your device to a unified endpoint management, 3rd party mdm could optinally integrate these features with graph api 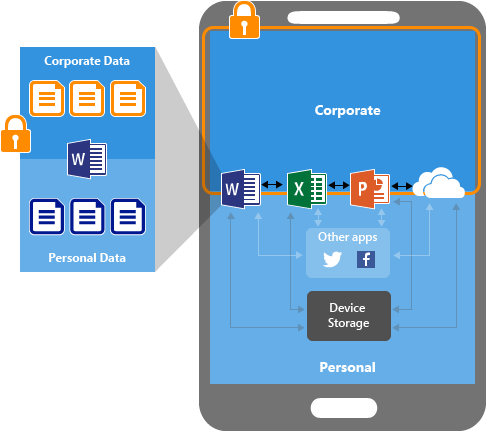 when it comes to enterpise integration with full device vpn support, certificate authentication or kiosk (single use) devices there is no way around a uem solution

don’t be a fool, select your prefered solution, based on the requirement for each usecase